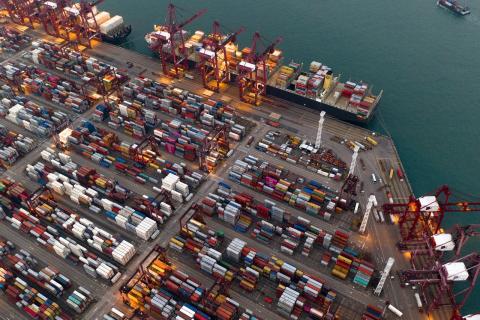 As early as the Stone Age, people exchanged goods in villages and merchants travelled around to find new products that they could sell profitably elsewhere.

While in Asia real trade routes such as the Silk Road emerged early on, in Europe it was only later that larger cities along rivers or by the sea developed into real centres of commerce and trade. Traders, in particular, quickly learned a few words in other languages in order to be able to conduct as much business as possible, and linguistically gifted translators became their constant travel companions.

Often traders were on the road for many months, bringing chocolate, coffee, silk and much more to Europe. The business of trading of rare goods was quickly recognised and different types of organisations were developed, fixed rules were agreed upon and thus the basis for today's global trade was created.

New forms of trade such as free trade or fixed, and temporary agreements with other countries are part of everyday life in the business world today, and with political innovations in individual countries, economy and trade are constantly developing.

Industrialisation, improved transport facilities and rapid progress in communication laid the foundations for more international trade in the mid-1950s. From 1956, a transatlantic telephone cable connected Europe with America, and increasing globalisation and automation in many production lines opened up new markets for globally active companies.

Professional translation agencies as we know them today have been around since about the middle of the 18th century, but with the economic boom in the second half of the 20th century, the demand for translations for business and trade grew rapidly.

Today, translation services are in greater demand than ever before in international trade, as communication takes place in real time via the Internet, telephone, and video. Often complex contracts are drawn up, translated and signed by all partners within a few days. Translators with legal training support the rapid handling of all details for partners with different languages and work closely with experts in international contract law.